The phenomenon known and the aurora (sometimes called the northern lights) are seen in both the north and south polar regions on the Earth. The Aurora are caused by solar wind (electrons and ions) streaming from the Sun to the Earth's magnetic field. The high-energy particles of the solar wind interact and excite/vibrate atoms in the Earth's upper atmosphere. When the atoms gain energy, they emit photons (packets of colored light) that create the aurora. 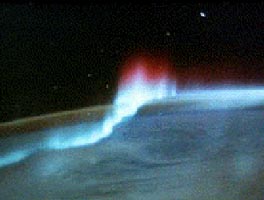 ABOVE, LEFT: The aurora, as seen from Earth take on many shapes and colors.

ABOVE, RIGHT: This picture was taken by astronauts. The aurora can be seen from space, and climb several kilometers above the Earth.

Back to the Sun