Solar Eclipses are seen when light from the sun destined to the Earth is blocked out by the moon! The diagram shows how the moon casts a shadow on the only part of the Earth during an eclipse. While one part of the world sees a total eclipse, the rest of the world will only see a partial eclipse! 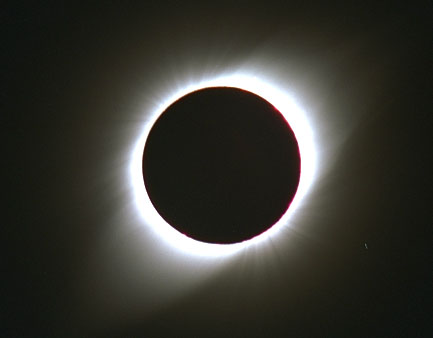 During a total eclipse, the Sun's corona is visible!

In a partial eclipse (viewed through a special solar filter) you can see part of the sun, and the moon only casts part of it's shadow.

A SAFE way to look at an partial eclipse:

You should NEVER look at the sun. Especially with binoculars or a telescope that aren't equipped with a special darkening filter. Instead, during an eclipse, you can make an simple device to watch the path of the moon's shadow! Here are the steps for your Eclipse Viewer:

Back to the Sun