[Next Page] [Back to Main Page] 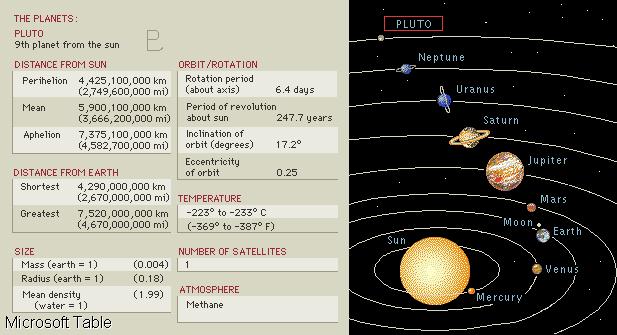 The size of Pluto

Pluto , in astronomy, ninth planet from the sun and outermost known member of the solar system.

Pluto also the smallest and most distant known planet in solar system. It has a one large satellite, named Charon. The names of Pluto and Charon are both taken from Greek mythodology. Pluto is the Greek god of the underworld and Charon is the boatman who ferried the souls of the dead to Hades over the river Styx.

The planets of the solar system are shown in sequence and in relative size. Pluto, about 5.5 times smaller than the Earth, or about two-thirds the diameter of the Moon. Pluto's orbit has an eccentricity of 0.25, which means that Pluto's distance to the sun is as little as 29.7 AU (temporarily making it closer than Neptune) and as great as 49.7 AU.

Through even the largest telescopes on earth. Pluto and Charon usually appear as only a single point of light, no larger than a typical star, which is why Charon escaped detection for so long.

During a mutual event the brightness of the Pluto/Charon pair decreases, because part of either Pluto or Charon is obscured. The larger the obscuring object, the longer the eclipse will last. Charon is approximately 1200 km in radius, Pluto is about 2330 km. Charon is over half of Pluto's diameter, making it the largest satellite relative to its primary. The next closest pair, by the way, is the earth/moon system.