Semi-major Axis, a: The average distance between the Periapse and Apoapse. Also half the length of the Major Axis.

Periapse, Rp: The closest point to the primary focus on an ellipse.

Apoapse, Ra: The furthest point to the primary focus on an ellipse

Eccentricity, e: The ratio between the periapse and apoapse against the Semi-major axis.

One only need two of the above variables to define the ellipse in a 2-D plane, using the equations:

Semi-minor Axis, b: Half the distance of the Minor Axis on an ellipse

Semi-latus rectum, p: The distance from the primary focus to the perpindicular point on the ellipse. 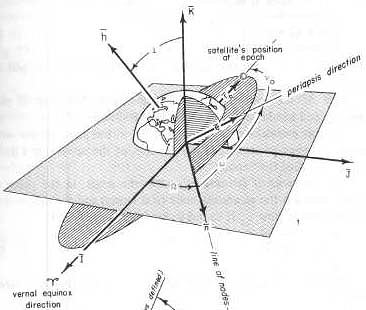 Inclination, i: The angle between the reference plane and the inclined orbit

Longitude of Rising Node, W: The angle in the reference frame between the First Point in Aries and the Rising Node along the Line of Nodes

Argument of Periapsis, w: The angle between the Line of Nodes and the inclined orbit's periapse

The First Point in Aries: The star in the constellation aries pointed towards by the interesection of the Earth's Equater to the Ecliptic in the first day of Autumn. This line is the Earth's Line of Nodes between the Equater & Ecliptic.