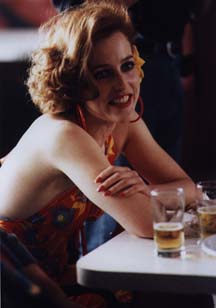 This photo and caption were reprinted with permission from Miramax Films, 1997.

Based on the acclaimed novel by Rodman Philbrick, THE MIGHTY is the hilarious, inspirational story of 13-year-old Maxwell Kane, larger than most men, who's slow in school, short on courage, and long in not fitting in. Then, he meets Kevin, a tiny Einstein in leg braces with more smarts, lip and spirit than any kid in town.

Both have been outcasts all their lives. To the local hoods they're "Frankenstein and Igor." But together, they form an unbeatable combination: an imposing force with an iron will and a wild imagination. Their adventures - both mythical and real-world - will prepare them for fights they've never thought they could face, and discoveries they've never imagined.