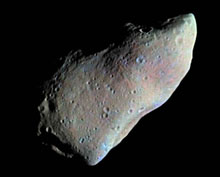 Asteroids are rocky, metallic objects that orbit the Sun and are too small to be considered planets. Asteroids are "minor planets" and range in diameter of 1000 km down to pebble size. 16 asteroids are bigger than 240 km! Most exist in an area of space called the Asteroid Belt, which lies between Mars and Jupiter. Even though there are lots of asteroids in space, all the asteroids put together would form an object only about half the diameter of our moon!

Scientists and astronomers have found that light colored asteroids (like Gaspra, seen above) are made mostly or rock, or combinations of rocks and metals, and darker asteroids are mostly nickel and iron.

Some Asteroids are even large enough to have their own orbiting moons! In the picture to the right, the asteroid Ida has a little moon of it's own, called Dactyl!

Meteoroids are what astronomers call objects too small to be asteroids, and that are on a collision path with the Earth! When they actually hit the Earth's surface, they are called "meteorites" and leave big holes in the Earth's crust called impact craters! When drawn in by the gravity of another planet, comets, meteorites and asteroids can create impact craters. 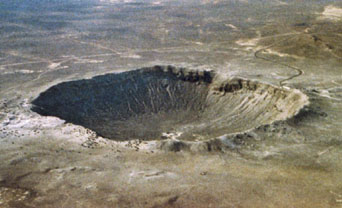 The picture above is the Barringer Meteor Crater in Arizona, United States. Below, is a photograph of a meteor crater in Wolfe Creek, Austrailia. 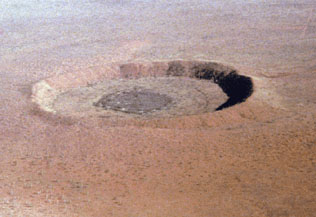 For More Infomation about Asteroids and Meteors, Try one of these great sites!