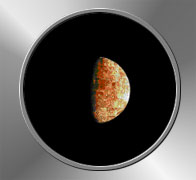 Mercury is the planet in our solar system that is closest to the Sun. In ancient times, telescopes could not be used to look at Mercury because the glare of the Sun was too intense. Today, we observe Mercury with radiation-detecting telescopes to find out more about the planet.

One thing that we know for sure about Mercury is that it is covered with hundreds of thousands of craters. Astronomers have named some of the most noticible craters after famous writers, artists and musicians.Originally, Mercury was thought to be two planets. Mercury was seen both in the morning at sunrise, and in the evening at sunset. Early astronomers figured that these were in fact two "different stars" when really they were later found to be the planet Mercury!

Click on the planet to visit the Mercury Image Gallery.

Why can't we live on Mercury?

To find out more about Mercury, try one of these great resources: