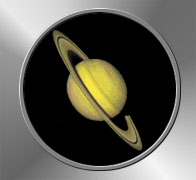 Saturn, named for the Roman god of reaping, is the sixth planet from the Sun. We know Saturn best for its rings. Long ago, astronomers used to call Saturn "the planet with ears" because its disc-like rings stuck out on the sides like a pair of ears! It took a long time to discover that Saturn had not one, but thousands of rings.

What makes Saturn's rings? There are lots of ideas on this subject. Because there are many pieces of rock, ice and gases in Saturn's ring system, some scientists believe that Saturn's rings are made from space debris that gets caught in Saturn's gravity, and is held in place by the orbit of Saturn's 21 moons. Or, if not assorted "space debris" then perhaps remnants of a failed planet or moon that collapsed under its own weight and then floated in rings around this, the second largest planet in the solar system, held together by a combination of gravity and the orbit of moons.

Saturn has the most moons of any planet in the solar system. Saturn's 21 moons are named after characters in mythology. Titan is the largest of Saturn's moons, and is the second largest moon in the solar system, after Ganymede, one of Jupiter's moons. Titan has been compared to a "young Earth." Titan is colder than Antarctica and has less atmospheric pressure than Earth, but its atmosphere mimics that of the Earth four billion years ago!

Click on the planet to visit the Saturn Image Gallery.

Why we can't live on Saturn:

To find out more about Saturn, try one of these great resources: