The picture above is a true-color image of Mars, taken in 1995. Mars has ice caps at each pole, but unlike Earth, the ice on Mars' poles are made of frozen carbon dioxide.

Mount Olympus, Mars' giant volcano is seen from a satellite (above) and simulated by a computer as a ground view (below).

The terrain of mars is very dry and rocky. The image below was went back by Viking 1 in the 1976. One July 4, 1997, the Mars Pathfinder landed on Mars and has sent back more data on the Red Planet. 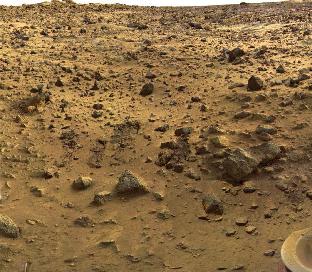 The "face on Mars" is a well known feature as well. What is it really? Evidence of alien life, or just another funny-looking rock? You be the judge!

Back to Mars || Go Home
(Images on this page are courtesy of NASA)
This site designed, created and modified by
[email protected]