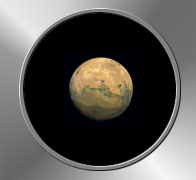 Mars is another planet that neighbors our Earth. Named after the Roman god of war, Mars is a little more than 1/2 the size of Earth, and is known for its raging dust storms and reddish coloration. People often call Mars "The Red Planet." What makes Mars look red? Mars' atmosphere is mostly carbon dioxide, which oxidizes iron on the planet's surface to create rust. Because there is very little water vapor on Mars, dry winds pick up and blow the dust around the planet. What little water there is on Mars is locked into an ice cap at each pole.

Other characteristics of Mars include it's volcano Mount Olympus and it's two moons- Phobos and Diemos. Mount Olympus is believed to be one of the largest volcanoes in the Solar System. On the surface of Mars, there are also visible scratches, craters and canals. Most of the craters were caused by impact during Mars' formation, but the canals are believed to have formed by either wind or water erosion.

Recently, The Jet Propulsion Laboratory (JPL) and NASA sent a rover to gather Scientific data about Mars. This rover is called the Mars Pathfinder. So far, the Pathfinder has sent back data and images about the planet that we here on Earth have never seen before! The scientists are even naming the largest rocks on Mars after favorite cartoon characters!

Click on the planet to visit the Mars Image Gallery.

Why can't we live on Mars?

To find out more about Mars, try one of these great resources: