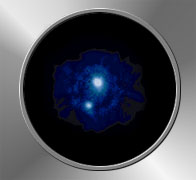 Pluto is the farthest known planet in the solar system. Nearly six billion kilometers from the Sun, Pluto is a very small and lonely world. It is not a gas planet like its four closest neighbors, and is smaller than Earth's own moon! Many scientists question whether or not Pluto is even a planet at all. Some think that Pluto and it's moon Charon are instead moons from other planets that went astray. Pluto, made of ice and frozen gases resembles a moon of the gas giants more than some of the gas giants' own moons! Perhaps Pluto is a moon of Neptune sent into a new orbit by a yet unknown, distant tenth planet? There is no hard evidence to support this theory, but only science and time will tell.

Click on the planet to visit the Pluto Image Gallery.

Why we can't live on Pluto:

To find out more about Pluto, try one of these great resources:

Go Home || Mission to the Sun